Why is the US – Federal Reserve Interest Rate so important?

The US Federal Reserve chose to keep rates steady at 2.5%, however indicated a rate cut could occur in the not too distant future. Jerome Powell commented on the slowing wage increases coupled with growing global trade conflict as major reasons for a future rate cut. The dovish stance on US interest rates is likely to send major pairs such as USDJPY, EURUSD and AUDUSD lower .

The US Federal Reserve chose to keep rates steady at 2.5%, however indicated a rate cut could occur in the not too distant future. Immediately follow Powell’s announcement, US Dollar index has fallen from 97.55 to 96.09. According to CME FedWatch Tool, there is an 89% chance of a 25bps rate cut in July. The Fed’s Dot Plot (Figure 1) is a visual representation of where Fed Officials believe the rate is going and analyst are now predicting 2 rate cuts for 2019. 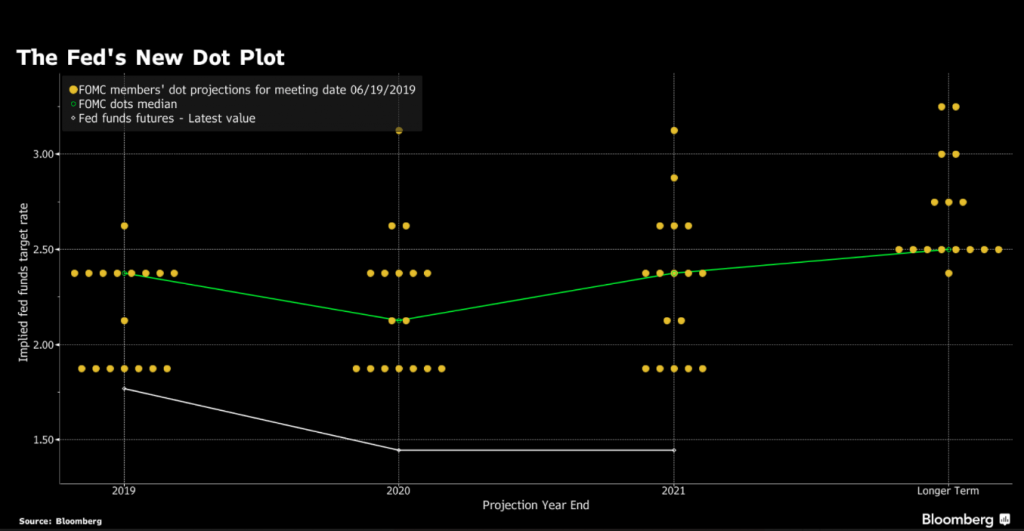 Tension between the US and Iran soared early this week after oil tankers were attacked in the Gulf of Oman. While the US accuses Iran for being responsible for the attack, Iran’s officials denied any involvement. To add to this tension, an unpiloted US drone was also shot down by Iranian military recently. As a consequence, crude oil prices shot up from the weekly low of 51.70 to 57.50, breaking the previous downtrend. ADX has made a turn whilst being well above the 25 level, signaling a change in trend. Although Donald Trump has pulled back from conflict with Iran at the moment, political risks and uncertainty will likely continue to escalate, especially since Washington has decided to deploy further troops and military hardware/aircraft. Crude oil prices will continue to be volatile in the coming weeks. Looking forward, if crude oil prices decisively break the 59.3 resistance (identified by the Fibonacci levels), it will henceforth approach 63.30.

EURUSD prices managed to push through 1.13000 this week and hovered near its weekly high of 1.13700 on Friday. Fundamentally, prices are supported by French and German statistics – Eurozone PMIs demonstrated signs of potential stabilisation. Prices managed to break the 1.13300 resistance. Momentum is trending higher (as seen from MACD), and STOCH lines are also pointing upwards. The break through 1.13400 will now expose the pair to 1.14200. However, despite the promising rise this week, the currency pair is expected to face resistance at 1.14150 and possibly turn around to retest the 1.12500 support level. This is because a Federal Reserve rate cut for July has been fully priced in and the probability of further rate cuts later this year is over 50%.

Key Economic Announcements for the week ahead 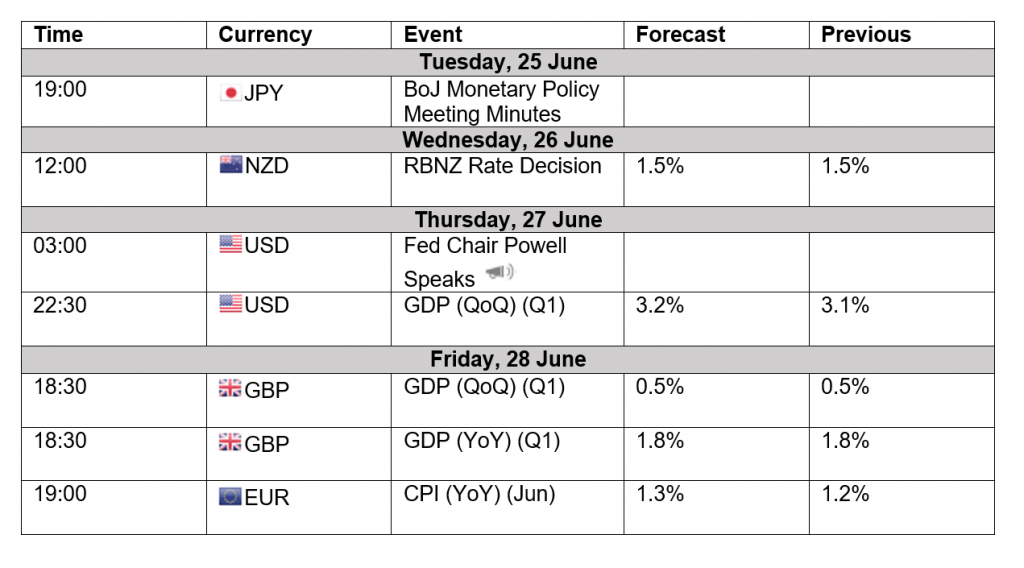