What is the RBNZ Interest Rate Decision?

Why is it important?

In general, higher interest rates attract more people to put their assets into the currency due to a higher % return on investment, which increases demand for the currency leading to a currency with higher value compared to other currencies. Vice versa, lower interest rates tend to make a currency less valuable compared to other currencies as they produce a lower return on investment. Interest rate decisions are one of the most important economic data releases that traders and investors watch out for in all currencies as they often cause huge volatility when they are being announced.

How does it relate to Forex?

The release of the most recent interest rate decision, although expected to remain at 1.75, caused the New Zealand Dollar to drop significantly – AUD/NZD rose from 1.0315 to 1.0440 at 12 pm 27th March 2019, within an hour after the release. After the interest rate announcement, AUD/NZD moved within the range 1.0402 -1.0454 for the rest of the week, which ended the bearish trend since beginning of March. With an outlook of possibly a lower interest rate in May, the New Zealand Dollar is looking bearish, with AUD/NZD expecting to rise.

The EUR/USD had a bearish week, re-entering the downwards channel and reaching a three week low of 1.12149. The pair saw its primary downtrend since early 2018 continue and its negative stance looks set to test the 1.12 support level. Should the consistent 1.12 support level be penetrated, this is a signal for a continued bearish trend. Alternatively, a reversal is possible with the pair bouncing off the 1.12 support level to shoot upwards, either continuing to move within the downwards channel or testing the extent of the 1.15 horizontal resistance level. The MACD has been in constant bearish territory since February with a bullish spike evident only once last week and a bearish crossover on Tuesday.

NZDUSD began the week moving up to the yellow resistance line before rapidly plunging down on Wednesday (27th March) due to unchanged interest rate announcement. On Thursday (28th March), the pair continued to drop towards the support line, however on Friday (29th March) it managed to move up at a highest of 0.68235 and closing the week at 0.68052. MACD (daily) made a bearish crossover on Wednesday (27th March), the Stochastic is beginning to reach the oversold area and RSI (14) is starting to come up based on Friday’s movements. It can be expected that the pair will move within the range of the yellow lines, with next week’s potential target at the 0.6925 resistance line, however if the pair breaks the yellow support line it would be a bearish indication with the next potential target at 0.67. 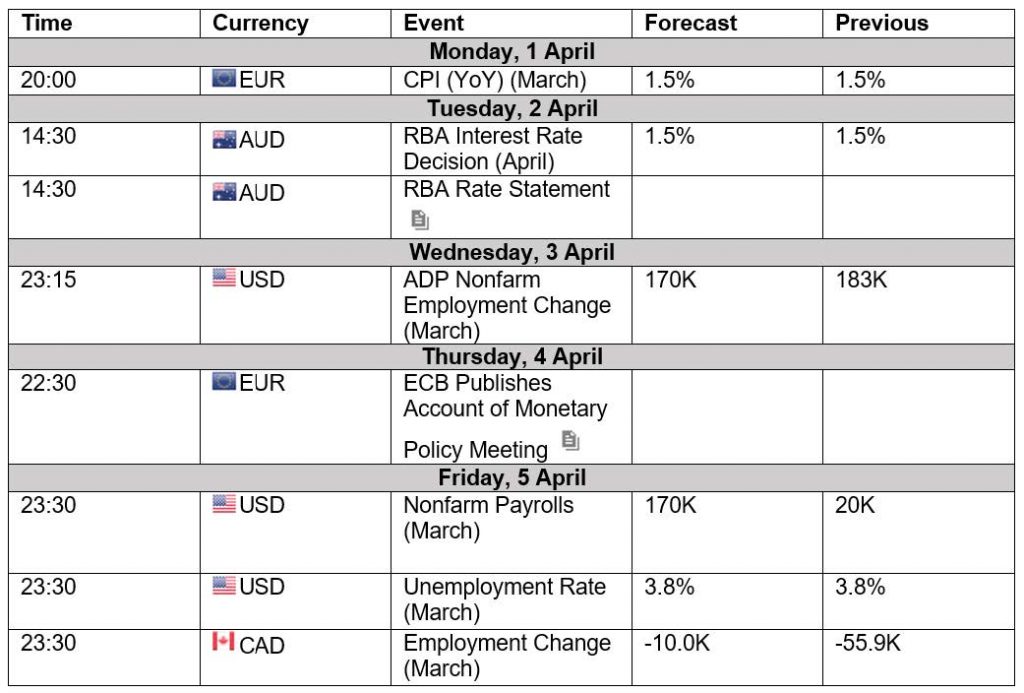