Why is the Aussie Inflation Data important?

The Australian CPI (Consumer Price Index) Data is important as it provides the central bank with key information about the state of the economy. This indicator is also a vital future guidance for investors to gauge whether the RBA may lower or maintain interest rates at 1.5% in their upcoming meeting on May 7.

The Aussie was sent under strong bearish pressure after domestic inflation growth for the first quarter was at 0.00% – below market consensus of 0.2% growth. Since end of 2014, Aussie inflation had barely entered within RBA’s 2-3% target band and underlying measures of inflation have also been undershooting RBA’s target for the past few years (see Chart 1). With even trimmed mean quarterly CPI growth below expectation at 0.3%, the future path for domestic inflation will not likely show any signs of moving towards the 2-3% target range. Therefore, the lower than expected inflation data could likely result in the RBA to cut 25-bps by October this year. 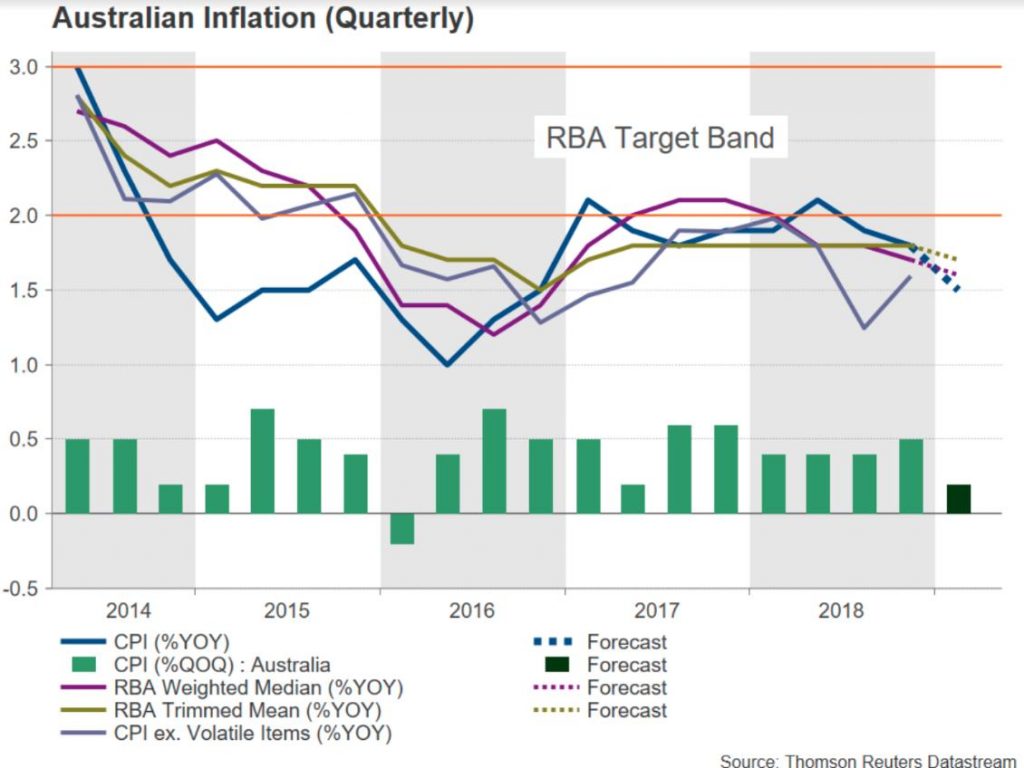 Why is the BoJ Monetary Policy Statement & Outlook Important?

The monetary policy decisions made by the BOJ is vital in gauging the key movement of the JPY, with either hawkish or dovish views about Japan’s economy influencing the value of the yen.

In addition, BOJ’s Outlook report includes their inflation and GDP forecasts. Therefore, any changes in their forward guidance about future inflation movements and GDP growth will create huge volatility of JPY.

The JPY was in bearish territory following BOJ’s decision to maintain status quo by keeping interest rates unchanged at -10%, and lowers inflation and GDP growth forecasts. The Japanese central bank says it will continue to keep interest rates extremely low until at least 2020. Adding to this negativity, dovish comments by BOJ Governor Kuroda at the post-meeting conference did little to ease the bearish pressure of the yen. BOJ’s 2020 – 2021 future guidance for Japan’s inflation lowered from 1.5% to 1.4%, and GDP growth has also decreased from previous 1% forecast to 0.9%.

USD/CHF had shown a consistent and strong bullish momentum from 22ndMarch.where it ultimately penetrated the 1.01543 resistance and reached a new high of 1.02304 since January 2017. The close this Friday (26th April) potentially indicate a tough resistance level at 1.024. The slowdown of bullish momentum is implied by a possibly bearish crossover movement of MACD line and signal implies. Additionally, an overbought Stochastic RSI supports the possibility of a short term correction to the downside. Looking forward, the upward trend of USD/CHF is expected to slow down with a potential target at 1.02388-1.02430 acting as resistance.

This past week, USD/JPY has been going through a choppy period. A massive bullish momentum was shown particularly on this Wednesday (24th April) after bouncing off at 111.933. However, after peaking above the 112.116 resistance level from the small bullish momentum, it posted a strong dark cloud cover candlestick pattern on the daily chart and broke through the support level at 111.651. As seen by the Stochastic RSI, a steep decline after the bearish crossover may imply a continuation of the bearish trend in the next few days. The MACD histogram may also supported this future intermediate downward trend. As a result, the first 110.870 support level would likely be tested by the bears, and second target is at the 109.756 support. 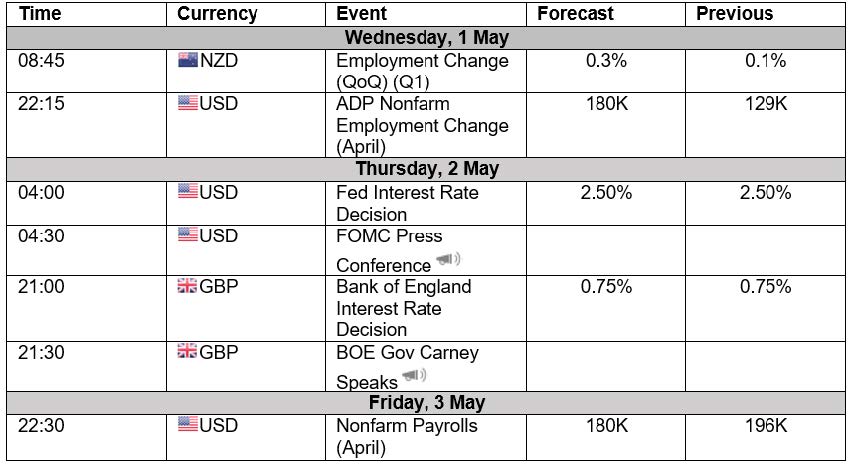